ORIGINS
SATO RACINSATO RACING is the international brand identity for BABY FACE Inc. Founded in Osaka, Japan in the 1980's by Katsuhiko 'Babyface' Sato, BABY FACE started out building race bikes. By the late-'90's the company was making a name for itself fabricating ultra-lightweight titanium exhaust systems and other specialized racing parts. Sensing there would be strong demand for the company's premium quality racing parts outside of Japan, Mr. Sato decided it was time to expand internationally. By 2001, a US distribution warehouse was established in California, and exhaust systems made by his company were being regularly imported and sold under a new brand name, SATO RACING.

SATO RACING - Made In Japan
Early on, when we were making parts primarily for the 'Big 4' Japanese brand sportbikes, our slogan 'Made in Japan' was adopted as a way to help our limited-production, handcrafted racing parts stand out from the cheaper competitng brands of motorcycle parts being mass-produced in China and elsewhere, while at the same time embracing the uniquely Japanese 'JDM' design aesthetics of our parts. Even today when many of our most popular parts are increasingly for very non-Japanese bike brands such as BMW or Harley-Davidson, we still kept the 'Made in Japan' slogan as a way of making it clear that our parts were primarily designed by, and for, racers in Japan, who have there own distinct needs when it comes to racing parts. As a result, some of the parts we sell might seem a bit unusual to riders outside of Japan. But since our parent company's primary market is Japan, it has never been a priority to try to 'design by committee' to cater to the tastes of riders in the US or other countries. And we believe our parts are all the better for it.

It is important to emphasize that this slogan is not meant as a snub to all the great companies proudly manufacturing parts in the USA. We make no claims that our parts are superior because they originate from Japan, only that they are uniquely Japanese in design, with all the pros and cons that go with that.
aprilia
Bimota
BMW
BUELL
HARLEY-DAVIDSON
Honda 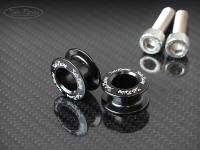 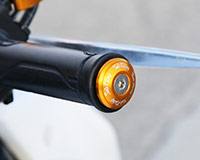